Matuaokore whānau connect with whenua to put the past to rights

The Matuaokore Ahu Whenua Trust is working to gain access to some of the few remaining blocks of Māori freehold land in the Gisborne area. The trust has not been able to develop their whenua because three of the land blocks, at the top of a hill overlooking Tūranga-nui-a-Kiwa, are locked between general land blocks. 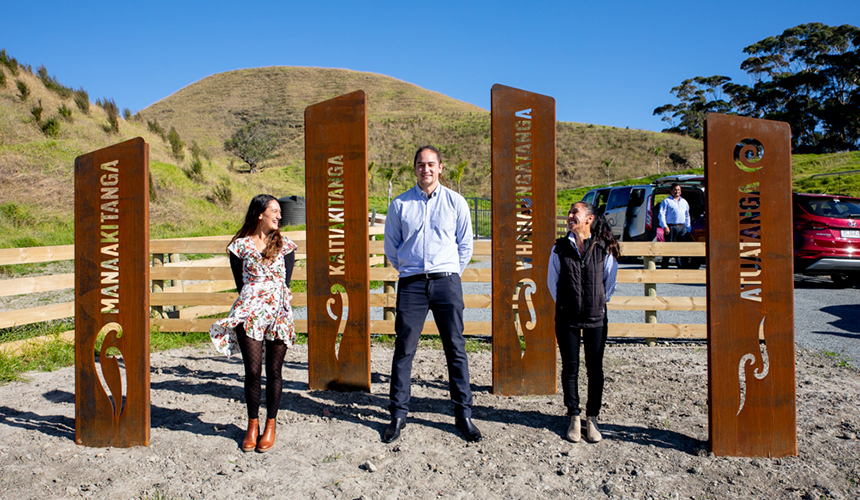 The Matuaokore Ahu Whenua Trust is working to gain access to some of the few remaining blocks of Māori freehold land in the Gisborne city area. The four adjoining land blocks in Kaitī, north of the city, are managed by the trust.

The trust has not been able to develop their whenua because three of the land blocks, at the top of a hill overlooking Tūranga-nui-a-Kiwa, are locked between general land blocks.

The fourth is an unformed paper road created in 1913 to provide access to the Māori land blocks surrounding it. The whenua at the top is what remains of nine original blocks.

The total land size of the three blocks plus roadway is approximately 6.5 hectares, small but significant to the whānau.

Over the years whānau have had to seek permission from their neighbours, general land owners, to visit their whenua using a private road that runs beside their paper road. Despite their efforts, past generations did not have the resources or support necessary to formalise their own road.

The chairperson of the Matuaokore Ahu Whenua Trust, Tammy Wātene, says her grandfather and father, his brothers and sisters – the Hokianga whānau – were always keen to establish access.

“In 1991 my dad and mum hauled a caravan up a slippery, horrible farm track and lived up there for six months. They grew kumara and other māra kai. Dad wanted to prove a point that he could live there. And they did!” says Tammy.

In May 2019 some of the whānau were granted special vehicle access to join the Māori Development Minister Nanaia Mahuta, who was announcing new measures to ease access to, and promote the development of, whenua Māori throughout the motu. 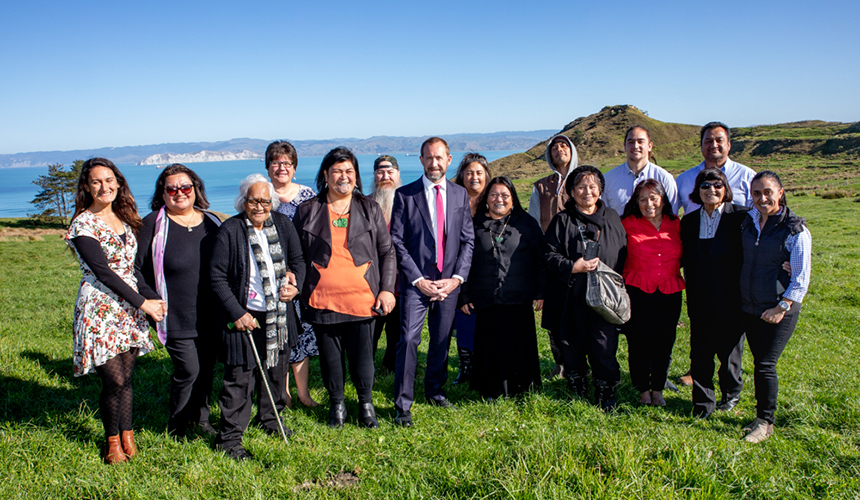 One of the many rangatahi in the whānau, Terri Hokianga, was one of the whānau who went through the gate on to hilltop whenua with its stunning view of the harbour and ocean.

“It was beautiful to be up there and see my nanny especially on the whenua, and be able to reconnect with them,” she says. “It’s important, too, for the rangatahi who come after us to have a place where they can put their feet down, have their roots, and call home.”

“My mother and her parents and tipuna backwards inherited that land and passed it on to us,” adds Tammy's uncle, Keiha Hokianga. “Whānau and whenua mean the same thing to me. We promised in our own way to take care of the whenua.”

Safeguarding the whenua for future generations

Keiha Hokianga is one of eight siblings who had the whenua passed on to them from their mother, Matuaokore Hokianga (née Waipara). The other siblings are Charles Hokianga, Arapera Harrison, Kehoma Hokianga, Sam Hokianga, Hori Hokianga, Tami Hokianga, and Tangi Haami.

Tammy also wants to acknowledge the significant role of her grandfather Peneamine Hokianga.

"He ensured the annual land rates were paid even though they couldn't gain access, and there were never any services provided by Council due the blocks being inaccessible,” says Tammy.

“He made this commitment to his wife, Matuaokore, to keep the whenua for their children and future generations."

The Kaitī land blocks are significant to the whānau as well as all Tūranga-nui-a-Kiwa Māori. Traditionally the bay once connected to the blocks was used as a fishing ground for iwi. The blocks are the last of what was once all whenua Māori in Kaitī.

Their whenua is bringing the Hokianga whānau together as the current generation makes renewed efforts through the Māori Land Court to resolve the issue of access.

The Trust has also reached out to the other landowners in the blocks – descendants of Rota Waipara, Matuaokore’s brother, who was also an owner, and the Hinaki whānau. In striving to include all owners in the blocks,  doors are held open for any owners to share the journey.

The impetus to form a trust came in 2016 when the NZ Transport Agency (NZTA) wanted to use the entranceway of their paper road as part of a cycle path for public use. The Matuaokore Ahu Whenua Trust was set up as the mechanism for negotiating with the agency on behalf of all the owners.

They did not want to sell and, instead, negotiated a contract granting NZTA a licence to occupy part of the entranceway.

“We’ve never known how to do anything about getting access to our land at the top. This created an opportunity for us to formally be a group, to be strategic, and to investigate what was possible,” says Tammy Wātene.

The Matuaokore Ahu Whenua Trust demonstrates some of the significant issues faced by many Māori landowners in the early stages of their land development journey.

Those issues include engaging multiple owners who mostly live away from the whenua, having an appropriate governance structure, combining small land blocks and, in this case, also dealing with the challenge of landlocked land.

This trust has an advantage in that all the trustees are first cousins. Their closeness, together with regular communication with the wider whānau (mostly Hokianga cousins,) binds and gives them strength.

“That’s been a revelation. We’re spread far and wide, but this is bringing us all closer. We’re all very good at putting things together and learning from each other.

“We’re lucky too. My dad and his brothers and sisters documented what they were trying to achieve and that’s helped us understand how hard it was. But they didn’t have the support we’ve got now,” says Tammy.

They have brought in legal counsel, and experts from Te Puni Kōkiri, Inland Revenue, and other government departments to help educate themselves, support that has been exceptional. Thirty or more whanaunga have turned up at wananga to learn more about their whenua and the responsibilities of the trust.

Forming a vision for a stable future

While progress has been made there is a lot more legal wrangling to get through. Neighbours say they have legal rights to the entranceway and other parts of the paper road because it is on their title.

“An agreement can’t be negotiated. The ruling around who has access is a legal ruling. Do the neighbours have rights? Do we have rights? If they don’t then we have a different kōrero to have with them and if they do that’s different again,” says Tammy.

Despite needing to resolve these immediate issues, the whānau is collectively forming their vision for the future of the whenua by investigating options like tourism, housing and cropping.

It is not yet plain sailing but the Hokianga whānau is united in its commitment to put right what their grandparents started all those years ago. To stand securely on their whenua and look out over Tūranga-nui-a-Kiwa, always.

The Matuaokore Whenua Trust was established in 2016 to connect whānau with their whenua. The Trust is working to gain access to their whenua in Tūranganui a Kiwa. The whenua has brought the whānau together and their journey has begun.

Jayden Hokianga – Matuaokore Descendent: My connection to this whenua would start I guess at the arrival of our waka.

Keiha Hokianga – Matuaokore Descendent: My mother through her parents and tīpuna backwards inherited that land and passed it on to us. We promised in our own ways to take care of it. Whānau and whenua mean a lot to me. So, there’s not a lot of difference between those two words as far as I was concerned.

Terri Hokianga – Matuaokore Descendent: I was lucky enough to go up the hill with all of our whānau earlier this year and it was beautiful to be up there and see my nanny especially on the whenua, and be able to be up there and reconnect with them.

Keiha Hokianga: Reconnecting with the land, as I said before, I’m never away from it. I might be physically away from it but here (touching his heart) and mentally I’m here. I’m on the land that my parents bequeathed to us.

Terri Hokianga: And it’s important for the rangatahi who come after us and continue to come after us to have a place where they can put their feet down, have their roots and call home as well. No matter where they are in the world they can always come back to our whenua and feel like they’re connected to this whenua.